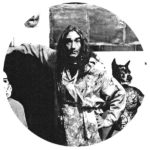 Alfredo Palmero is already the third generation of an artist lineage that began with his grandfather, Maestro Palmero in 1901.

His career it’s been influenced by figures such as Picasso, Klee or Velázquez, rather by contemporary and experimental styles. His personal vision of painting stands out between the bipolar classicism and contemporaneity, adding a touch of unique magnetism to his work.